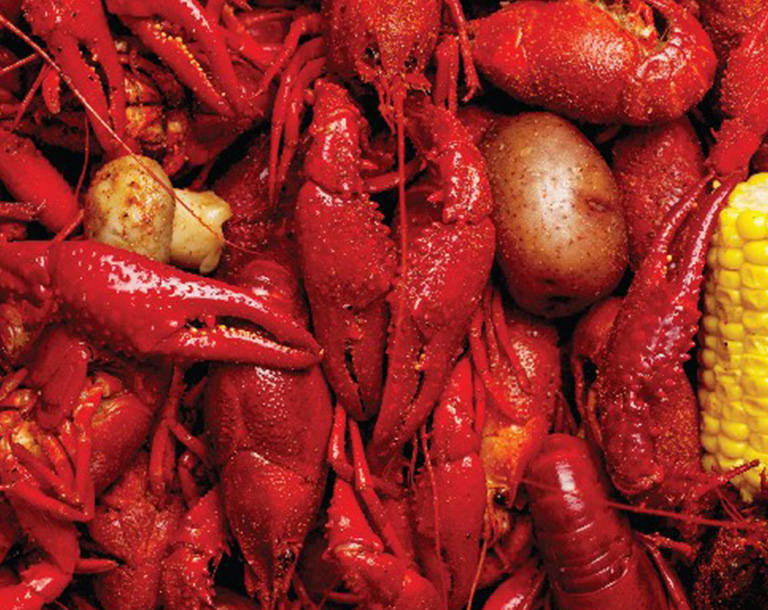 The following terms are words found in Cajun French dialect, often based on traditional French words, that have come to become a regular part of the vernacular of Cajun households or a part of their Cajun cuisine.

(from the French, “L’Acadiane”) Acadiana is the name given to the 22 (out of 64) parish (county) regions in Louisiana that is home to the Cajun population, one of the largest Francophone speaking groups in the United States who share a common cultural heritage.

Andouille is a type of coarse-grained sausage most known for its large role in Cajun cooking. Brought to the United States by French immigrants through Louisiana, it has become a very popular type of sausage that is used in everything from gumbo to jambalaya.

A boucherie is a historical term for a communal hog butchering party. The community would gather to butcher one hog and make traditional pork-based products such as sausage, boudin, hoghead cheese, and tasso for all to share. Ms. Eula Savoie, founder of the Savoie’s Companies, attended boucheries growing up and learned how to butcher hogs from these events.

(pronounced boo-day) From the French word meaning to sulk or pout.

One of the first items that Ms. Eula Savoie became known for selling in her store once she started butchering her livestock was boudin, a traditional sausage-shaped food made from ground up leftover parts of a hog once the best meat has been stripped.

The term “Cajun” comes from the term “les Acadiens,” for the people who were exiled by the British from the “Acadie” area of Canada now known as Nova Scotia. “Les Acadiens” was sometimes shortened to “Le ‘Cadiens,” which then became Anglicized to simply, “Cajun.” The term now encompasses an entire cultural heritage of those living mostly in Southwest Louisiana; however, the Cajun people are no longer comprised strictly of descendants from those first exiles but have since intermingled with British, German, Spanish and other cultures as well.

Mischievous or sly, oftentimes used to describe a child who is precocious and mischievous.

(pronounced “sha” with a short a): French Cajun word for dear or cute; term of endearment oftentimes used as an exclamation.

(pronounced “coo-be-yahn): In Louisiana courtbouillon is a thick, rich, aromatic Cajun fish stew, usually made with catfish. It’s completely different from the Court-bouillon of the French, which means a liquor or stock that’s used as a cooking liquid. The Creole version would use a tomato-based stew and whole redfish.

This word comes from the French word, “couillon” and is the Cajun French word for a foolish person, a fool.

Cajuns are traditionally people who are known for their ability to utilize every resource when butchering livestock. Cracklins are a still widely popular snack of fried pork skins or fat and can be purchased from gas station food stops, meat markets, and country grocery stores. They are most loved fresh out of the oil when the fat melts in one’s mouth.

Known as crayfish further north, or mudbugs, crawfish is a popular freshwater crustacean resembling a tiny lobster. In Louisiana, mudbugs, or crawfish are put in everything from étouffées, omelettes, sushi rolls, fettuccine dishes and boiled with seasoning, eaten right out of the pot. Crawfish shacks and crawfish ponds are not an uncommon part of the Southern Louisiana landscape, and crawfish boils are a common and popular get-together.

In Louisiana, Creole refers to people of mixed heritage, mostly from ancestries rooted in West Africa, Spain, France, the Indigenous American, and Caribbean countries such as Cuba, Haiti and the Dominican Republic. Like Cajuns, the Creole people also developed their own dialect (different from Cajun French) as well as their own style of cooking that was influenced by the techniques and ingredients of these other cultures. The main difference between similar dishes in Cajun and Creole cuisine such as gumbo is that Cajun gumbo will use minced celery, onion and bell pepper as a base, while Creole gumbo is one that uses tomato, onion and bell pepper.

(pronounced ahn-vee) A craving, hunger for something.

A traditional Cajun dish made from smothered seafood, and, unlike a gumbo, light roux, eaten over rice. The gravy for this dish is thicker than gumbo, and should not be served like gumbo.

A Cajun dance party, usually to a live band.

(pronounced fee-lay) Seasoning made from ground sassafras, popular to sprinkle over gumbo and stews.

Fried meat that is then cooked in a heavy sauce, served ladled over rice.

A little taste, usually referring to a pre-meal appetizer.

Unlike the thickened, floured fat found in northern regions, gravy, in Cajun cuisine, often refers to sauce or stew of a dish, or especially the juicy liquid that is created by adding water and seasonings to the blackened bits of meat stuck to the bottom of the pot after browning meat. The bits are scraped up, sautéed with with onions, bell peppers and celery, seasoned and then everything, including the seasoned roast is covered in water and cooked until the meat falls apart. The gravy is what the flavorful liquid is called, and water is continuously added in order to ensure there is plenty of “gravy” to lace over the rice along with the tender meat. Cajuns often refer to their dish of roast as “rice and gravy,” without directly referencing the meat that makes up this dish.

Originating from the French word meaning “soot,” grimes refers to the little pieces of meat stuck to the bottom of the pot after browning.

(pronounced gree-gree) A curse put on someone.

a staple of most Cajun dishes such as gumbo, jambalaya and étouffée, it’s a base of diced onions, celery and bell pepper which is then sauteed with oil. The Holy Trinity is a reference to the strong Roman Catholic background of the region.

An extra service, or a little something extra, lagniappe is generally considered something thrown in for free, as in a baker’s dozen.

In French cuisine, mirepoix is the staple for all stocks, soups and sauces and is usually made up of equal amounts of diced celery, onions and carrots. But there are regional and cultural variations of mirepoix, one of them for Cajun cuisine which uses celery, onion and bell pepper, also known as the Holy Trinity.

Another word for crawfish, a popular freshwater crustacean resembling a tiny lobster. In Louisiana, mudbugs, or crawfish are put in everything from étouffées, omelettes, sushi rolls, fettuccine dishes and boiled with seasoning, eaten right out of the pot. Crawfish shacks and crawfish ponds are not an uncommon part of the Southern Louisiana landscape.

(pronounced pee-row) A pirogue is a Cajun canoe.

A thickener made by vigilantly stirring flour with butter or lard over heat until paste becomes fragrant and thick, used as a base for gumbos, stews and gravies. It’s a staple in Cajun cooking.

Tasso is a specialty of south Louisiana, a spicy version of smoked ham made from the shoulder butt part of a pig.