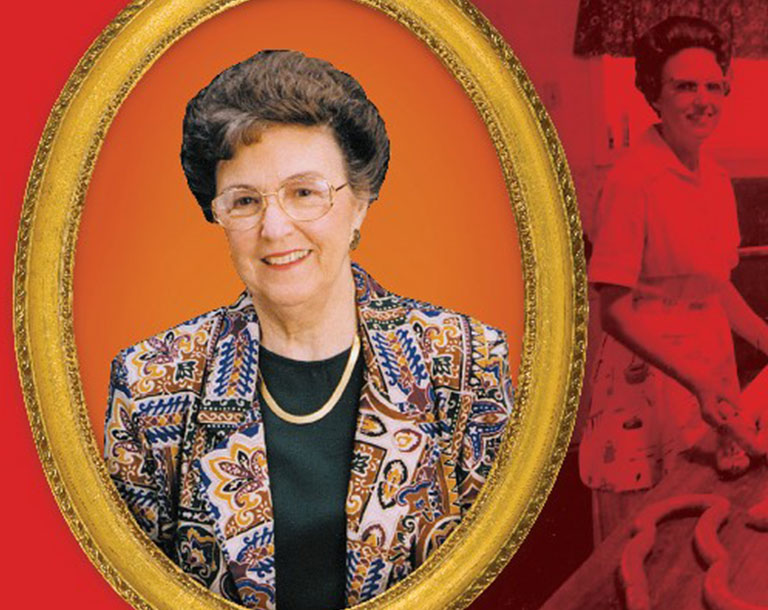 In 1926, Ms. Eula was born to Ollie and Ezola Morris along the Little Bayou Teche, just southeast of Opelousas, LA. Ms. Eula grew up in a traditional Cajun home speaking both English and Cajun French. Because her mother was sickly, Ms. Eula learned to cook when she was just a child, including pork, a local staple. This early training in Cajun cooking had a major impact on Ms. Eula’s future in the food industry.

“We were poor, but we always had good food to eat. We raised chickens, hogs -- we lived off the land,” Ms. Eula said. “About the only things we ever needed to buy were rice, flour and such.”

In 1949, at her parents’ suggestion, Ms. Eula and her husband Tom Savoie purchased a small country grocery store on Highway 742 in Opelousas, Louisiana, opening under the name, Savoie’s Grocery. While they didn’t know it at the time, they were laying the groundwork for a Cajun food empire.

“We bought it so I could keep working. It’s a job you can do while you’re pregnant,” Savoie said.

In 1952, the young Savoies purchased a 187-acre plot of land to go into the hog farming business to supplement income from the store. In 1955, the price of hogs in the U.S. dropped and the cost of raising hogs became too much of a financial hardship. Ms. Eula’s mother suggested slaughtering the unsold hogs to make sausage and other pork-based products they could sell.

“Even though mother was sickly a lot of times, it didn’t stop her from showing me how to do things,” Savoie said. “My mom taught us how to make the sausage, boudin and hoghead cheese. That all comes from her. It’s all based on her recipes.”

The Sweet Smell of Sausage Success

Using a hand-operated No. 3 home meat grinder and her mother’s recipes, Ms. Eula began making smoked sausage, boudin and hoghead cheese, selling them in their grocery store. Soon, she branched out to selling her products throughout the area.

“That’s how it all started. I was delivering the sausage made from one hog each week.”

Ms. Eula’s smoked sausages proved to be a huge success. She went from butchering one hog a week to two, then three. Soon she was buying hogs from other farmers.

Since the Savoies’ store was located on the main route connecting Houston, TX, to New Orleans, LA, many travelers enjoyed Savoies’ Cajun food products, and their popularity grew. Ms. Eula moved the business into a building behind the store, hiring from local families to help handle the increase in volume.

Diversification into Other Food Products

The 1960s was a time of diversification for the company. Ms. Eula started offering other Cajun food products, such as rice dressing mix and jarred roux. Because roux is very time-consuming to make from scratch, Cajun cooks welcomed the convenience of a delicious, ready-to-use roux, and it became a very popular item for the Savoies.

“1962 is when we began selling through stores other than our own.”

The Age of Growth

Throughout the 60s the Savoie’s® brand continued to expand, thanks to improved production methods, wider distribution, smart marketing and a rising demand for authentic Cajun food products. Cajun families were getting busier in lifestyle but still wanted traditional meals served at their tables.

In 1972 after divorcing, Ms. Eula bought out Tom’s interest in the business, which at the time consisted of 30 employees working in a 5,300 square-foot processing plant behind the old grocery. Ms. Eula began investing in new, automated equipment for better production. However, she never purchased machinery to replace employees, who she considered family.

“We added new machinery as we could afford it, but never to replace an employee,” she said.

Ms. Eula’s role evolved over the years from making and delivering sausage to overseeing products and employees. She continually looked for improvements and helped to develop new products. She took an active interest in her employees and was passionate about protecting them. She personally helped several of her employees who struggled with reading and writing to maintain their checkbooks.

In 1990, when Louisiana created the term “Certified Cajun,” Savoie’s Companies was one of the first companies to apply for it and receive the state’s “Certified Cajun” designation.

“I don’t like the idea of somebody saying it’s a real Cajun product and they’re making it up in Minnesota or wherever,” said Ms. Eula.

In 1991, Ms. Eula received the Louisiana Business Person of the Year award from the Louisiana Department of Economic Development. That same year, Working Woman magazine recognized her with an Entrepreneurial Excellence Award. In 2001, she was awarded the prestigious national Ernst & Young Entrepreneur of the Year Award for the Gulf Coast Region.

On January 6, 2010, Ms. Eula passed away. Her family continues to run Savoie's Food in the tradition she established, loyal to the Cajun culinary heritage. Many employees of her business are from the same families that she hired years ago, a testament to the loyal and beloved status she enjoyed throughout her career. Her family’s time-honored Cajun recipes are still widely shared, and are the basis for the fine Cajun food products Savoie's Food continue to develop and distribute.

The Savoie's Foods is privately held, Louisiana-based Company involved in the development, manufacturing, packing, marketing and distribution of wide range of authentic Cajun Food Products. Originating from the heritage recipes of our Founder, Ms. Eula Savoie. It is true Louisiana food, made by true Loiusianinans, and used in the homes of Cajun Families everywhere.

Ms. Eula grew up right down the road from two other future Cajun entrepreneurs: Tony Chachere and Chef Paul Prudhomme!